In a strange coincidence, both the forthcoming sequel to Kazaam, Shazam starring Shane Battier from the Miami Heat, and the American Movil backed, Canberra based basketball team, Shazam, were halted in their tracks on Monday night, the former due to budget cuts and the latter due to the musical stylings of the Pirates Basketball Club.

Battier was in Hollywood working on the project when the announcement came through from Touchwood Pictures. The film was rumoured to have had cameo appearances from Shaquille O’Neal, Bruce Willis, Sylvester Stallone, Wesley Snipes, Arnold Schwarzenegger, Renée Zellweger, Scarlett Johansson, Bugs Bunny and Matt Damon. 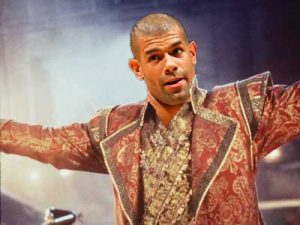 Going into the match the Pirates knew it was going to be a tough ask to defeat the league’s number one team but not impossible according to head coach, Geoff Kleinbrenner: “We had a good strategy and I knew that if we stuck to the plan, we’d have a strong chance of causing an upset.”

Both teams put their best foot forward in the opening exchanges with Shazam’s Micahel Burdeu stamping his authority with early touches and early points in the paint.

Todd Gregory’s first touches for the Pirates were equally profitable with the power forward making the most of his time along the baseline in what will be his last game for the Pirates for three weeks. Next week, Gregory will be preparing to travel to France where he has been selected to represent Australia at the 4th annual Super Dooper Basketball Tournament being held in Toulouse.

While the Pirates may have shown their readiness to play and stick to a plan early in the game, they weren’t ready for the trash talk that came from Burdeu. “That guy’s got a degree in trash talk or something”, lauded Pirates Captain Daniel Lillicrap. “All night he was over us with the Yo Mama jokes. All we had in response were some lame knock-knock jokes.”

Burdeu’s team may have been winning the psychological battle with the Pirates but towards the end of the second quarter, his team was beginning to lose the physical battle on the court.

Smart passing from Brett Butler, Dan Bray and Kel Dullihanty opened Shazam up with Dullihanty easily brushing through the defence for an exquisite lay-up before backing up with a long-range three pointer to see the Pirates clear by 7 points.

The Pirates lead grew to 11 midway through the third period and an air of confidence within the side allowed themselves to deviate from the game plan by through a number of consecutive turnovers due to bad passes and poor decisions.

The extra possession allowed Shazam to get back into the game as Brian Christensen knocked down some tough perimeter shots to bring his team back to within 5 points of the Pirates.

Shazam could now smell victory and the Pirates could smell a foul odour coming from their bench. Nobody officially owned-up to the nasty aroma which distressed some in the team who easily confused the smell for that of defeat.

But just as it looked as though Shazam had reclaimed the momentum, Pirates guard Daryl Jamieson entered the fray nailing a couple of crucial three-pointers building a comfortable buffer heading into the final few minutes of play.

The clock then became Shazam’s enemy and confusion over the substitution of Dan Bray, who had just committed his fifth foul, only made matters worse for Shazam.

With under two minutes to play, not even some late baskets from the reliable Scott Culpitt nor a hastily implemented defensive trap could save them from the inevitable as the Pirates confidently took control of the game, calmly running out the clock in the back court from a successful inbounds pass. The final score36 to 25 saw the Pirates move from fourth spot to second on the DMG ladder and Shazam drop two places to third.

After the game, in a show of great respect and commaraderie, Shazam invited the Pirates into their locker room where the players relaxed and enjoyed a couple of beers and some banter about the current season.