A seemingly contrite Geoff Kleinbrenner fronted the media after their loss to Ruff ‘N Ready on Monday night, admitting for the first time that members of the Pirates backup squad had embarked on a “team building” exercise on their last road trip to London back in mid 2012. Refusing to name the players involved, as they have yet to answer to an integrity board followed most likely by some form of water board, Kleinbrenner, conceding that this behaviour had interfered with the preparation of other athletes during their stay in London. During the press conference, Kleinbrenner was admitted this was a failure of leadership to detect and prevent this type of behaviour among junior players and was apologetic to those involved, assured the gathered media that changes would be made in the future.

Coming on the heels of the scandal involving the Australian men’s relay swim team where that team only last week admitted to its own “team bonding” experience taking Stillnox combined with Red Bull, that led to the team banging on the doors of other athletes in the Australian camp late at night. 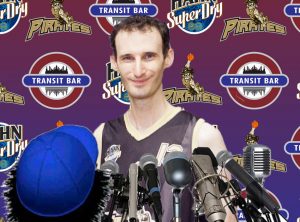 Known among the pirate community as Browning, the practice involves individuals taking heavy doses of Metamucil in combination with beer and Red Bull, the objective to outlast one’s teammates by resisting the urge to use the bathroom or otherwise relieve one’s bowels in situ.

Players from the Pirates backup roster will now front an integrity board where they face a maximum sentence of having to watch back-to-back episodes of The Shire, non-stop over a six hour period. Pirates coach, Patches O’Houlihan was made aware of the disruptive behaviour the day after the occurrence and was reportedly ‘dismissive’ of the concerns of other athletes. Since the scandal has aired on national television, O’Houlihan has been terminated from his position effective immediately. Pirates Vice President Geoff Kleinbrenner had this to say: “We can understand team members wanting to bond and prepare themselves for high level competition and getting it wrong, there will be a price to pay for these individuals for sure, but we cannot understand or accept a coach or another senior member of staff at this Club ignoring the legitimate complaints of other athletes. We have since decided to terminate O’Houlihan’s contract with the Pirates.”

With O’Houlihan out of the picture and several reserve players facing disciplinary action, the Pirates starting squad appeared unaffected by the behind the scenes drama. From the tip, the Pirates looked the more controlled of the two teams, taking first blood through a series of well worked passes that allowed Brett Butler to send Matt Dallwitz in for an easy deuce, no pun intended. Some well anticipated steals on the part of the Pirates led to the belief that they would dominate the match, but just as they threw the ball away through poor discipline and poor execution.

For the Pirates at least, their night was punctuated by what seemed like bad karma as shot after shot dropped through the rim only to bounce back out and into the hands of a Ruff ‘N Ready rebounder. Not even a Butler special that stayed on the lip of the rim for a full four seconds would give the benefit to the Pirates, falling away into the arms of a waiting defender.

Although missing both big men, Frank Fernandez and Ashley Forrest, the blocks came through thick and plenty with Brett Butler denying Andrew Lovelock (8 points) on several occasions while Matt Dallwitz (3 points) sent Darren Cundy (7 points) packing with a massive rejection along the baseline in the fourth quarter.

Certainly it was a tough night at the office for several Pirates who missed what seemed like easy, under the rim baskets yet the Pirates were never out of contention no matter how far ahead Ruff ‘N Ready seemed to get. There were times when the Pirates showed great patience only to be let down by the finish on the play.

Unsurprisingly, the Pirates Todd Gregory (11 points) was having a great night from beyond the key but was having a tougher time underneath the hoop. Dan Bray (6 points) was earning the majority of his points from the strip but was active from baseline to baseline with his tenacious defence, ultimately costing him a spot on the court when he fouled out on a dubious blocking foul in the final minutes of the fourth quarter.

Neither team could really complain with the standard of officiating as the dubious calls were always in the fifty-fifty arena and the only sticking criticisms lay in the style in which the fouls were relayed to the bench. While calls were missed and mistakes were made, neither side gained a clear benefit.

To the credit of the Pirates, that although they did at times question the call of referees, they were the team to let go of their frustration while the same could not be said of Ruff ‘N Ready who incurred the lenient wrath of the referees showing their lack of appreciation for the rules as well as their attitude toward the referees.

But this did not stop Ruff ‘N Ready from putting on a show offensively. On-court awareness by the Pirates was at an all-time low in the first half and it was only after several adjustments to their defensive strategy that Ruff ‘N Ready were made to work harder for their baskets.

More than anything else, the 1,371 crowd were entertained with Ruff ‘N Ready’s smooth passing game that allowed them to build up ten point leads at several points in the match. This didn’t stop the Pirates from bouncing back as a couple of well placed shots always brought them back to within three points of the lead.

The Pirates could not do any better to regain the lead and trailed Ruff N’ Ready by twelve points, 49 to 37 at game’s end. They now face the Australian Catholic University’s Saints as the season heads closer to the finals.