Wayward passes, little offensive movement and missed opportunities characterised the Pirates battle with the Saints on Monday night ahead of the release of Holy Combat; the latest release in the Halo series made exclusively for the X-Box. Saving the Pirates from a fall from grace and the CMG ladder were Darren “Daz” Jamieson (8 points) and Ashley “Pyro” Forrest (9 points) who were far from their best but still managed to do enough to get the Pirates ahead in the final three minutes and keep them there for the remainder of the game.

Injuries continued to plague the Pirates with fears early in the first quarter that Forrest had reinjured his right shoulder after spending two weeks on the sideline. After doctors examined him at the break it was found to be a simple over-extension that would not require any further time away from the court. Ben Roberts (4 points) was also nursing an injured right ankle and was cleared to play by team doctors so long as it was heavily strapped. 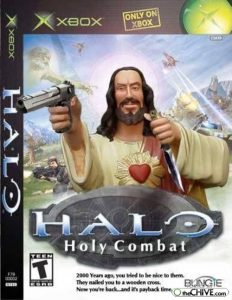 Heavy contact in the third quarter forced Dan Bray to the sideline with a calf/hamstring problem and was kept off the court as a precautionary measure. Also taking a heavy hit, captain Daniel Lillicrap initially showed no signs of injury but was forced to forego the post-game press conference due to mild pain in his left shoulder as well as a gash on his right wrist that needed to be cleaned-up.

Tied up at the end of the first ten minutes of play, the nonchalant Saints must have sensed they were in with a real chance of an upset and when things got underway in the second quarter these feelings were confirmed through an unlikely shot made from a hustling Jesse “G-Man” Evans (2 points).

A steal made by Chris “Miss” Manton (6 points) and converted to points only strengthened the Saints belief that they could humiliate the Pirates and although clearly unhappy and lacking energy, the Pirates didn’t give-up on the game.

Turning to Ashley Forrest to change the tide the Pirates looked strong and although Forrest could only muster 3 from 11 free-throws his presence alone helped the Pirates with their offence.

Always on the backburner for the Saints, centre Andrew Bichurst (14 points) at times showed great skill weaving through several Pirates players going coast-to-coast for points that kept the two teams within striking distance of each other. At other times, Bichurst appeared distant from the play perhaps due to an earlier confrontation when he was called for a charge against Lillicrap that clearly frustrated the number 23.

In the second half, the Saints always seemed to stay a basket ahead of the Pirates, finishing the third quarter up by two and keeping this lead right-up until the final three minutes of the game when Daz Jamieson drained a clutch three to put the suffering scallywags of the sea up by two. A degree of panic set in among the usually carefree Saints as they now sensed that they were two points behind in a game they were capable of winning, turning the ball over on two occasions that essentially ended their chances when Todd Gregory (8 points) was able to capitalise on a give-‘n-go against the run of play.

The Pirates themselves appeared to lack discipline in the final minutes of the game showing a fundamental lack of both clock and court awareness that could have easily ended in tragedy. Some unnecessary fouls late in the fourth quarter also meant that they would not be able to slow the game down without sending the Saints to the free-throw line.

However the Pirates did manage to take an unconvincing victory over the Saints, winning 32 to 28 in the end.

With only a handful of games remaining, the Pirates now face an uphill battle to get into the finals this season and must start with an in-form Raptors team on Monday night.