While most families were enjoying the four-day Easter holiday at the traditional Royal Easter Show, a group of half-robot, half-panda mutants briefly stole focus from those Sydneysiders to defeat an arrogant Pirates crew.

Holidays, attitude and ultimately frustration got the better of the Pirates on Monday night as the Robo Pandas Rick-rolled the scurvy laced rogues into a sea of despair in a display of superior shooting that put the Pirates to shame. 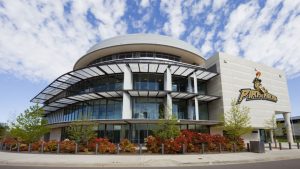 In what has almost become a tradition at the Pirates, the squad went about their opening minutes supplying successive turnovers through poor passing. Sadly, their trend of reducing turnovers as the game progressed failed to occur and the extra possession given to the Pandas in the first quarter was not wasted. 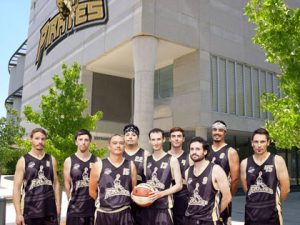 Proving valuable acquisitions to the Pandas midway through the season, Dan Helson (6 points) and Brad Matheson (11 points) carved up the Pirates from long-range successfully dropping T-bomb after T-bomb to put themselves ahead on the scoreboard 14 to 11 at the end of the first quarter.

A shocked Pirates team attempted to get their game back on track by attempting to return to their original strategy of isolating their bigs on their mismatched Panda defenders, a strategy that showed promise in the first quarter, when properly executed, thanks to Ashley Forrest (8 points), Todd Gregory (4 points) and Brett Butler (5 points).

Looking upbeat by the start of the second quarter the Pirates were soon swamped defensively as Thomas Ng (11 points) started to drop his patented foul-line floaters that had his opponents struggling for answers.

By the end of the half, the Pandas had increased their lead over the Pirates to four points, a margin that the planking pillagers of the pine felt comfortable overcoming early in the third period, but as the game wore on, it was clear that the mounting missed opportunities at the Pirates offensive end were taking their toll.

For the Robo Pandas, their run to victory continued from long-range as Matheson could not be stopped from finding the bottom of the net.

With just four points added to their score in the third quarter, the Pirates were facing a tough challenge to tie the game with a red-hot Pandas team that was now nine points ahead of them.

Yet try they did, their zeal and determination easily evident even though at times their energies were misdirected toward unproductive means that robbed the Pirates of both time and focus.

Reducing the margin to five points, 34 to 29, the Pirates finished off a tough regular season with a hard-fought battle against a worthy foe and while this means that the Robotic Pandas will now have the opportunity to self-replicate over the break, the Pirates stand ready to avenge this loss when these two teams next meet.

Speaking with me after the game, a relaxed and suitably fatalistic Daniel Lillicrap, Captain of the Pirates, had this to say: “Full credit to the Pandas. They were the better team and totally deserved the win.” When the discussion turned to his side’s attitude during the game, Lillicrap strangely pivoted his answer to the fact that it was a holiday game and that tempers are often more fragile when players are on the road away from their families and friends: “I hate holiday games! Christmas, ANZAC Day, Feast of Maximum Occupancy and Easter; we always seem to have to play on days we should be with our families. Honestly, I’d rather be back in my cell on D Block.” Lillicrap then requested a “shout-out” to his “peeps” in Goulburn’s SuperMax prison before heading to the locker room to be with his teammates.

A common complaint among players in the CMG, holiday games usually entail a disrupted training regime as clubs attempt to balance the needs of players to spend time with their families and the need to prepare for scheduled games. In this case, the Pirates had foregone their normal Sunday session to enjoy Easter.

The Pirates will play their last game at the Tuggeranong Treasure Dome prior to a two-year renovation that will likely see the team play at the Australian Institute of Sport in the interim. Fans will have their last chance to catch the squad on home soil when they take-on the 66’ers in what will be another epic battle for Pirate pride.