Just as the sun is setting on another Australian summer and another CMG competition, the sun was also beginning to set on bitter rivals Easts after the Pirates toughed it out to score a thrilling come-from-behind victory.

Missing some of their big guns due to injury and suspensions, Easts were always going to be at a disadvantage going into the match, even if they were still getting slightly better odds at $1.90 whereas the Pirates were out to $2.30 by tip-off. 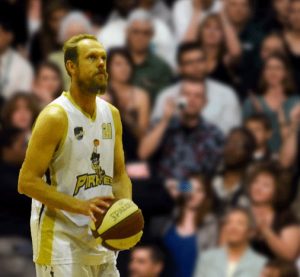 Speaking sideline with Pirates Vice President Geoff Kleinbrenner throughout the game, he revealed the team’s strategy of using their big men going into the game, yet for the first few minutes of the game and, as it would turnout, the entire first quarter, the only scoring came from the perimeter thanks to some smooth threes drained by none other than Darren Jamieson (9 points, 2 rebounds, 2 assists).

And while the Pirates were looking good from outside early on in the game, Easts were determined to get their points attacking the Pirates key which worked more often than not as Travis Naden (9 points) went to work destroying the Pirates defence with his strong drives to the hoop.

Players and fans alike would have been deluding themselves if they thought this game was not going to get physical and they didn’t have to wait long for the proof when Daniel Lillicrap (7 assists, 4 rebounds, 1 charge) held his nerve and put his body on the line to collect an offensive foul from Easts power forward, Zac Currall (9 points). Lillicrap was flung six feet skidding backwards across the court his white uniform giving the appearance of being singed as barely noticeable traces of smoke wafted from his shorts. Lillicrap then brushed himself off and continued on with the game. Teammate Ashley Forrest (6 points, 6 rebounds) later described the incident to reporters that it was “the biggest charge he had ever seen in his life.”

Still, all too often in the first half the Pirates would lose their situational awareness on defence allowing Easts to make some easy and sometimes spectacular shots close to the basket.

Things looked grim for the Pirates by the close of the first quarter as Jamieson had been the only scorer for the motley crew with his two three-pointers, allowing Easts to go up by four at the break.

If things were bad at the break, they soon became worse in the second quarter as Easts went on a sixteen point run as almost their entire roster got on the scoreboard in a furious ten minutes of play. Finishing with a further ten points to their name, the Pirates were not completely done for by half-time but body language and the looks on the faces of the Pirates said that they were ready to give up.

While it is unknown what exactly was said in the Pirates locker room at half-time, the Pirates did emerge from the break with somewhat of a bounce in their step, eager to take the fight to Easts in the remaining twenty minutes of play.

From here the Pirates turned the game around reducing the turnover rate drastically, playing smarter than harder even though players like Brett Butler (8 points, 5 rebounds, 2 assists, 1 block) and Ben Roberts (6 points, 5 rebounds, 1 assist) didn’t get the half-time memo, consistently nailing some tough fade-away shots to close what was a ten point gap to just two points by three-quarter time.

Working consistently hard at both ends of the court, Matt Dallwitz (2 points, 7 rebounds, 2 blocks, 2 assists) was at first raking in the offensive boards before he began using the baseline to draw in defenders before finding an open teammate inside the key who was able to capitalise for the Pirates. In addition to this, Dallwitz was keeping the Pirates home front safe, rejecting anything that was thrown at the Pirates hoop.

By the start of the fourth and final quarter, the momentum was all with the Pirates as they went about exploiting the baseline to open up outside players for outside opportunities to shoot or drive to the hole. Defensively, there were few among Easts who were willing to chance their arm against the solid forward group mustered by the Pirates.

After some well executed reverse layups, the Pirates tied the game with just over three minutes to spare in the final quarter. If Easts were panicking, they certainly didn’t show it as they continued to mount heavy resistance including a hastily organised man-on-man defence after the Pirates finally hit the lead through a Brett Butler special from close inside the key.

Two points ahead and with fouls to spare, the Pirates looked to be in control of the game and as the clock counted down towards zero, Easts could ill-afford to slow the play as any additional foul would send the Pirates to the foul-line where they could close-out the match.

And that is exactly what they did. A late foul by Easts sent Todd Gregory (4 points, 5 rebounds, 1 steal, 1 assist) to the line where he made good on one of his two free-throws, essentially sealing Easts fate. With four seconds left to play, Anthony Della Vedova took possession of the ball and tried his best to get past an attentive Ben Roberts and fire away a last-ditch shot to tie the game from three-quarter court. But it was not to be, the Pirates walking away with a narrow three-point victory 40 points to 37 that was more for pride than position on the CMG ladder, smarter passing proving a pivotal factor in the Pirates win.