The Duke himself was on-hand to witness the tragedy that was the Pirates versus We Got Game match, taking aim at some of the players before being asked to holster his weapons. No, we’re not talking about John Wayne, nor are we talking about representatives from Duke University. We are in fact referring to none other than serial tough-guy, misunderstood good-guy and video game legend, Duke T. Nukem. 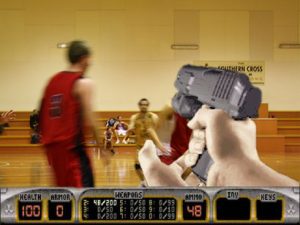 Mr. Nukem was in town to help get finance for his struggling feature film production based on his own gritty true-life story, “Duke Nukem and the Land of the Lounge Lizards”, and decided to watch his beloved Pirates play at the Treasure Dome before flying out to an undisclosed location. 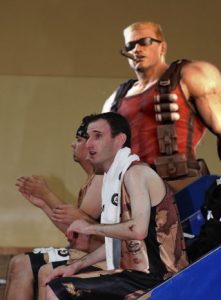 With the Duke watching on, the Pirates starting-five dared not to disappoint their homicidal homie, building a solid five point lead in the opening five minutes, first through a flying Matt Dallwitz (2 points) who seemed to defy gravity with his rebound and put-back then, through a Deezy triple drained by Pirates captain Daniel Lillicrap (5 points).

Some early substitutions made by the Pirates then started to undo the efforts of the starters as the turnover rate started to pick-up in what was looking like a repeat of the Pirates last two performances at the Treasure Dome.

But for all their mistakes, We Got Game could not capitalise on the scoreboard with just five points registered to their name at the end of the quarter, three of those courtesy of Tony Flemming (10 points), formerly of the Air Ballers but who has since struggled to remain injury free in his career.

Fleming was certainly a handful for the Pirates throughout the game, always beating his defender to the most advantageous spot under the basket where he was able to crash the offensive boards and earn points from both the field and the charity strip.

Another valuable asset for We Got Game was Liam Parker whose six points were well timed and certainly decisive to the game’s outcome.

A strong second quarter by We Got Game had the scores tied with most of We Got Game’s points coming from the foul line rather than the field as the Pirates were forced to foul after losing possession or losing favourable rebounding position to their opponents.

Sadly, the only scorers in the second period for the Pirates were Todd Gregory (4 points) and Ashley Forrest (6 points), their combined four points was an obvious setback in their hopes to cause an upset against their third placed opponents.

The scheduled half-time show had to be cancelled as the safety concerns raised by the Teletubbies could not be overcome prior to the show, principally that Duke Nukem refused to surrender his infamous Colt M1911 pistol or any of his 40mm grenade rounds.

The gathered crowd did not know what to make of the half-time break, most kept at least one eye on Nukem whose earlier tolerable obnoxious behaviour had morphed into a tense, stand-off-ish attitude, no one knowing exactly what the heavily armed man would do should the slightest thing provoke him.

When play continued the crowd breathed a collective sigh of relief as the awkward silence that had occupied the Treasure Dome had made for an uncomfortable fifteen minute wait.

For the Pirates, their third quarter performance mirrored their performance from the second with just six points in ten minutes of play with points coming from just two players, Ashley Forrest and Brett Butler (9 points).

By contrast We Got Game went on their best scoring run of the match racking-up seventeen points from five players finishing the quarter with a handy six point lead over the Pirates.

With just ten minutes remaining the Pirates lifted their game creating some extra pressure and taking advantage of some extra possession to gradually whittle down their opponent’s lead and get them back into the match. Some early baskets from Ben Roberts (2 points) and Daniel Lillicrap helped keep the Pirates in the fight.

Still trailing by seven points, a quick three from Darren Jamieson (3 points) brought the Pirates closer to their goal, a goal that seemed manageable given three minutes still on the clock but the Pirates struggled to connect with their shots, a problem they have faced throughout the game and throughout their season.

Just when hope seemed gone, a clutch three-pointer from Brett Butler brought the Pirates to within one point of We Got Game but with a minute left in the match, the Pirates were out of options and had to hastily switch to a man defence that was too late in preventing the ball from getting into the hands of Brenton Nelson (3 points) who ran the clock down to its conclusion and a one point We Got Game victory courtesy of the Pirates sixteenth and final foul in a count that saw the Pirates accumulate eight fouls for every one against We Got Game.

Despite the loss and although the Pirates had the obvious look of dejection on their faces as they left the court for the locker-room knowing that just one more basket would have seen them over the line, Pirates captain Daniel Lillicrap was quick to reassure his squad that they had made the most of their opportunities and, as was the nature of basketball, they were simply unfortunate on this occasion.

The Pirates will certainly have another opportunity to redeem themselves when they take on league leaders, Easts, on Monday night.