While most of Canberra was fixated on the impending release of the federal budget, those with better priorities were either courtside at the Australian Institute of Sport or watching live on the Box Network as a demoralised Pirates outfit crashed hard Tuesday night, failing to fully respect their opponents and ultimately paying a high price for their mistake.

The game had begun weeks earlier with a chance meeting of the two groups at the exclusive Transit Bar where Deezy and his crew were approached by Prince and the Revolution and challenged to a game of basketball. Full of confidence and booze, Deezy and the Pirates laughed at the notion before accepting the invitation to play believing the game to be a foregone conclusion in their favour. 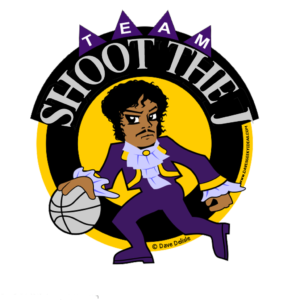 How wrong they were. “Those cats can ball” admitted a humbled Daniel Lillicrap (3 points) after the game. “They were setting these crazy picks that we couldn’t get through.”

Judging from the final score, pundits would be mistaken to believe that the game was all one-way traffic from start to finish, yet that assessment would fail to take into account the fact that the Pirates built a solid lead for most of the first quarter, only relinquishing it in the final minutes of the period.

Lillicrap was the first to score for the Pirates, nailing his only shot of the game from the right corner of the court. Soon after, Shoot The J switched to a man defence denying Lillicrap, Jamieson (2 points, 1 assist, 1 rebound), Bray (1 point, 1 assist, 2 steals) and Dulihanty (1 steal) the time and space to put up accurate perimeter fire.

In contrast, Shoot The J had no problem finding the bottom of the net, receiving just enough fortune to win a major lottery, they seemingly could not miss. Leading the charge, Chris Colosimo (21 points, 9 rebounds, 2 assists) was always in the right place at the right time for the put-back while Russ Koehne (14 points, 9 assists, 3 rebounds) was doing it at both ends, defensively denying the Pirates access to the key then running their set plays “Computer Blue” and “Darling Pikki” with strong effect.

The Pirates made it difficult for themselves with their poor movement and ball fixation that forced turnovers, cost them rebounds and inevitably points. One commentator aptly stated that the Pirates “weren’t in Kansas anymore” in reference to their switch from the CMG to the CPL.

Full-time brought some relief to the Pirates as well as a generous serving of pancakes courtesy of Prince and his team. It also brought the unwelcome news that Pirates centre, Ashley Forrest (4, points, 6 rebounds, 2 blocks, 1 assist) had reinjured his left shoulder and is likely to need corrective surgery that will see him sidelined for up to twelve weeks.

Speaking after the game, Pirates captain Daniel Lillicrap, confessed his error in judgement going into this game and his post game epiphany:  “You know I kinda (sic) learned something today. Never judge a book by its cover.”