Coming on the back of a dismal performance last week against Shoot The J, the Pirates were keen to redeem themselves in the eyes of their fans as they set about tranquilizing the in-form Bears.

Getting off to a good start, the Pirates posted eight points in the first four minutes of play as the Bears struggled to adjust to the Pirates new defensive tactics. 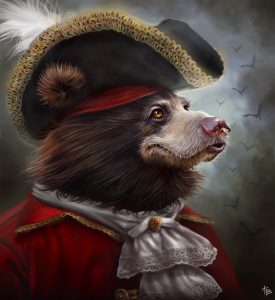 Increasing their spacing on offence helped put the Bears on the board as Michael Verzosa (21 points, 4 steals, 1 assist) threatened the Pirates from long range.

When Verzosa wasn’t hitting the three, Kurt Jorgenson (11 points, 10 rebounds, 3 assists, 1 steal) was filling the void, proving difficult to control or contain, whether out on the perimeter or inside the paint, Jorgenson was instrumental to the Bears first catching up to the Pirates by the end of the opening quarter and later building a small lead through the second period.

For the Pirates, forward Todd Gregory (12 points, 5 rebounds, 3 steals, 2 assists) was making the tough shots look easy from across the baseline. Proving equally valuable early in the game, Brett Butler (4 points, 7 rebounds, 2 steals) and Ben Roberts (6 points, 4 rebounds, 2 assists) gave the Pirates the self-belief that they could potentially upset the league’s top seed going into the second half.

Refusing to get ahead of themselves, the Pirates still anchored their expectations to reality and fought to remain competitive and with their opponents.

From the third quarter right through to the final two minutes of the game, the Bears lead stayed within a range of between 8 and twelve points and as the game drew to a close, the Pirates set themselves the manageable goal of keeping the deficit to ten points.

Alas, fatigue and a lack of focus and concentration in the final two minutes of the game helped push the Bears lead out to fifteen as the Pirates gave away several turnovers that ended in open layups.

Perhaps the most decisive factor in the Pirates defeat was their inability to find the inside of the net from beyond the arc with only Kel Dulihanty (5 points, 4 assists, 2 steals, 1 rebound) recording the team’s only three pointer late in the game.

Still, there were a lot of positives to take from the game as the Pirates outscored their opponents in terms of field goals and accrued three more steals than the Bears.