Struggling for consistency, the Pirates suffered another heavy loss on Tuesday night, this time against the Beavers who were fresh from their recent demolition of the Old Cotter Dam and experienced little difficulty demolishing the Pirates over forty minutes of play.

With the warm-up game in overtime, the second in as many weeks, the Pirates were given little court time to prepare for the main event, a minor factor in their ultimate demise given that the Beavers had the same experience but a factor nonetheless. 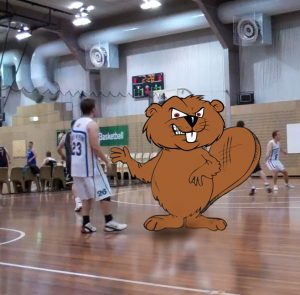 Rushed on to the court, the Pirates had their worst start to a game ever allowing the Beavers to post twenty-three points while the Pirates could only manage a woeful three.

One could be forgiven for believing they were attending a Victims of Crime meeting as courtside fans repeatedly heard the phrase “sorry” from the Pirates as they made more poor passes than they did good. In fact, the Pirates had twice as many bad passes in the first half than they had points for the entire game.

Showing signs that their stigmas were more mental than physical, the Pirates appeared hesitant to directly challenge the Beavers defence, giving-up the advantage of a rare mid-court turnover only to see the ball return into Beaver control.

The Beavers suffered from no such impairment, casually nailing open jump-shots when the opportunity afforded them the space to do so. The Pirates however seemed to be plagued by the invisible shot-clock, giving away possession after one or two passes rather than working for a close range option.

Leading the way for the Beavers was Mike Woods whose 13 points, 5 steals, 3 blocks and 2 rebounds obliterated the Pirates from one end to the other. Point Guard, Leif Nilson (15 points, 7 rebounds, 3 assists) looked at home against the Pirates defence, his confident dribble allowing him to dictate terms to the scurvy plagued rogues of the sea. Still, Man of the Match winner, Steve Le Cerf (16 points, 7 assists, 3 rebounds, 1 steal) was also at ease in this confrontation.

Defensively the Pirates weren’t too far off the pace as the Beavers still had to make some tough shots from outside the key, yet at times, these hairy river rats maintained a near monopoly on offensive rebounds as the Pirates once again fell into the trap of ball gazing rather than keeping their opponents away from the rim.

Offensively though was another story. The Pirates lacked poise and confidence which lead to poor decisions that allowed the Beavers fast, easy possession. All too often the Pirates would go for the miracle ball only to have it predictably intercepted by an eager Beaver.

While not the accolades they would have wanted, Pirates veteran, Dan Bray (2 points, 2 assists, 2 steals, 4 rebounds) featured among the Pirates in this lop-sided affair along with the teams only other scorers, Kel Dulihanty (2 points, 1 steal) , Brett Butler (4 points, 2 steals, 2 rebounds) and Todd Gregory (4 points, 6 rebounds, 1 assist, 1 steal).

Undoubtedly their worst offensive performance in a game thus far, the Pirates did however manage to double their score in the fourth quarter, a small consolation perhaps at the mercy of the Beavers, but it still remains to be seen if the Pirates have the gumption to see out the season and learn from their experiences.