A security guard for the Australian Institute of Sport sparked an international incident on Tuesday when they misheard a conversation between team mates of a local basketball team leading to one of the Pirates being taken into witness protection by the FBI at an undisclosed location.

The conversation referred to a team in the CPL known as “Shoot The J” however, the guard thought he heard the players say “shoot Dan Bray” leading him to believe that Pirates guard, Daniel Bray, was in imminent danger of an attack. This triggered a full scale security operation involving local security, the Australian Federal Police, the ACT Fire Brigade HAZMAT response unit, the Australian Defence Force, the Federal Bureau of Investigation and the US Marshals Service. 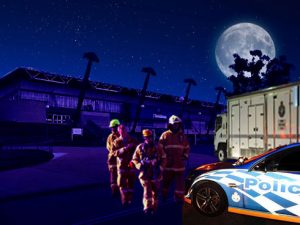 Bray and his family was then whisked away to an undisclosed location (several rumours suggest he is in Hawaii) leaving the Pirates without their starting guard and a bill for $1.36 million to cover the cost of the additional security. Pirates Vice President Geoff Kleinbrenner later told reporters that this amount would be docked from Bray’s $5.1 million contract.

With Bray in hiding, the Pirates looked to sixth man, Nick Hollier (2 points, 1 assist, 3 rebounds) to fill the gap. Coming off the bench late in the first quarter, Hollier made an instant impact, controlling the tempo of the Pirates offence.

The first half for the Pirates was a far cry from their round two encounter against Shoot The J, going toe to toe with their foe, Kel “Hammer” Dullihanty (4 points, 1 assist) and Darren “Kokomo” Jamieson (6 points, 1 steal) combining to throw a mix of inside and outside shots at their opponents.

Suckering in the Pirates defence so that they could weave into the key, Shoot The J proved most effective driving to the hoop through Matt Kalokerinos (10 points, 3 assists, 1 steal, 3 rebounds), Lyndon Field (12 points, 2 assists, 7 steals, 2 rebounds) and Chris Colosimo (13 points, 2 steals, 2 blocks, 8 rebounds).

At half-time, only five points separated the two teams, a major improvement for the Pirates who trailed by 29 after twenty minutes of play. Still it was clear they were missing the services of Taylor Sneddon who was granted personal leave on the Monday of the game.

After the Australian Tax Office’s Glee Club half-time performance of “Last EOFYS (End Of Financial Year)”, the Pirates set about climbing the mountain that was STJ. But it was not too be. The offensive problems that have plagued the Pirates all season continued to hinder the team’s progress on the scoreboard, managing a further ten points over the next twenty minutes of play.

The Pirates could have easily allowed Shoot The J to runaway with the game but to their credit, they worked smarter on defence to deny them a knock-out victory as they did the last time these two teams met.

The final score, 41 to 26, showed that the Pirates were on the road to success even if their destination still appeared a tiny spec on the horizon. They now have an extra week to make further improvements before they next take on the Beavers at the Australian Institute of Sport.