STJ Captain Chris Colosimo led his team to victory Tuesday night against the Pirates who were again without stars Ben Roberts and Taylor Sneddon. Keeping pace with STJ for the first half, the Pirates would have been happy with their efforts but a lacklustre second half that lacked focus, urgency and skill killed any chance the murderous marauders had of causing an upset.

Trailing by just four at the end of the first quarter the talk on the Pirates bench was to stay competitive but midway through the second quarter, STJ raised the stakes by switching to a man-on-man defence that the Pirates had no answer for, allowing their opponents to slip away to a commanding lead. 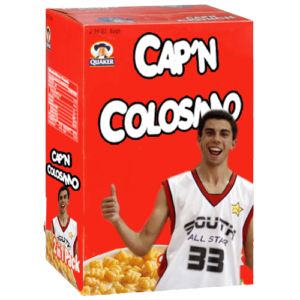 Rust, inattention and a lack of commitment on defence then plagued the Pirates for the remainder of the match as a series of basic mistakes cost the Pirates easy baskets for STJ.

Doing his best to spark his team into action, Dan Bray took it to the hoop, making baskets and foul-shots that helped the Pirates improve on their previous performance, even if it was ever so slightly.

Pirates Vice President, Geoff Kleinbrenner let his disappointment show at the post game press conference where he told reporters that the Pirates needed to “play defence more than offence and it’s (sic) the simple things that always, let me emphasise, always win you games. If we can’t all hustle back on defence then what’s the point?”

Kleinbrenner let on that he thought some players in the squad were more interested in their own personal statistics, so that they could earn contracts with other teams, than in the overall team’s performance: “What does it say about a player who waits at half-court for the ball? Even if you suck at defence, just by being there… don’t you add something to the attitude of the team? Right now we say that if they score it’s all on the individual defending the scorer… That’s not how a winning team operates. We need defence first, offence second.”

After another difficult defeat at the hands of STJ, the Pirates now look toward their match-up with the Bears next week hoping that their form in the final stretch improves sufficiently to garner another victory.