30,000 eager fans turned-up to the Australian Institute of Sport on Tuesday night expecting an evening with famed television comedian, Bill Cosby. Instead fans were treated to the 19th episode of the Bill Clisby show, where even Clisby (9 points, 3 assists, 1 steal, 2 blocks, 5 rebounds) was upstaged by one of his co-stars, Pete Maddocks (21 points, 2 assists, 1 steal, 4 rebounds) who sank an amazing 7 three pointers throughout the game.

Fans arrived at the stadium prior to the 7pm tip-off to be greeted by ushers who welcomed ticket holders with a phrase that brought looks of bewilderment from many and unassuming expressions from others. Of those fans canvassed after the game, roughly 70% stated that they were there on the mistaken belief that they were there to see the famed father of the fictitious TV family, the Huckstables, Bill Cosby. Upon closely inspecting their tickets, most usually sunk their shoulders and entered somewhat reluctantly; seemingly determined to get their money’s worth. 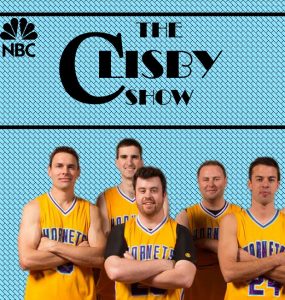 The remaining 30% offered no resistance as they clearly strolled into the stadium anticipating Bill Clisby and the Hornets to do their best as they took on the struggling Pirates Basketball Club.

Roberts’ absence was particular conspicuous given that he had previously played for the Hornets under a special 14 day contract in 2012, rumours suggesting that Roberts’ management were looking at ways to get out of his three year deal at the Pirates so that he can join another club. When these rumours were put to Pirates Vice President Geoff Kleinbrenner, he simply laughed and made light of the suggestion: “Ben’s a fantastic player and his absence tonight has been weeks in the planning as (sic) as far as I’m aware, he’s pursuing Club approved activities away from Canberra.”

Fortunately, the game marked the return to the squad of playmaker Taylor Sneddon (17 points, 2 steals, 7 rebounds). Were it not for Sneddon, the Pirates would have struggled to make double digits as they failed to sink even the most basic of shots.

With the tallest team in the league facing the shortest, it was almost inevitable that Hornets would win out over the Pirates and as the first quarter progressed in the Hornets favour, 14 points to 4, it became clear that it was more a question about the margin than anything else.

Besides the fantastic shooting from Maddocks, the Hornets managed to sting the Pirates through their fast breaks and second chance opportunities where they out rebounded the Pirates 49 to 28.

Unfortunately for the Pirates, the Hornets tactics of slicing the hands of their opponents went unnoticed by the officials, a factor that helped in their ability to gain offensive superiority.

The Pirates did manage to reduce the effect of the Hornets trademark high-cut through the key it was their outside shooters that did all the damage. Even with defenders in their proximity, the Hornets managed to put away three after three, costing the Pirates 27 points.

However, speaking with Kleinbrenner after the game, he found that there were some positive signs to take away from the match: “Our turnovers were well down and we didn’t force bad shots like we usually do… I can understand the frustration but we still need to look at the bright side of our efforts.”

The progress of the Hornets slowed during the second and third quarters, whether deliberately or as a result of the Pirates defence is open to debate however, it was plain to many in the crowd that the Pirates lacked sufficient energy, motivation and intensity to accomplish the small things at the defensive end that would allow them to better control the Hornets close to the basket.

After a tough matchup against the Hornets, it is hoped that some stability in the Pirates roster will enable them to make some inroads in their upcoming games, yet with a final score of 62 to 28, there is still much to do at Pirates HQ.