When knowing is half the battle, the other half is red and blue lasers, neither of which the Pirates had in any great quantity in their battle against G.I. Joe’s sworn enemy, Cobra on Monday night. 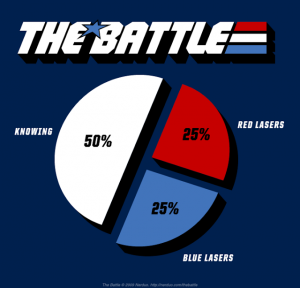 For the first three quarters, the Pirates were the more consistent team on both offence and defence and in this reporter’s opinion, more worthy of the win across the entire 40 minutes, but as often is the case in basketball, the better team can still lose it in the final count.

Feeling confident with their initial lead, the Pirates seemed to revert back to some of their old habits such as ball-watching on the rebounds, allowing the Cobras to dominate the offensive board statistics 3 to 1.

In their favour was the obvious improvement in passing where the Pirates had three times fewer turnovers than their rivals and their ability to keep Cobras point guard and play-maker Gregory Wallace (no relation to William Wallace) out of the picture.

Yet it was the Cobras Lachlan Ice who undoubtedly did all the damage to the Pirates by posting 11 of their 31 points through his strong presence in the key and around the foul-line.

The Pirates assumed they had a comfortable lead of six points going into the final period after some great passing from Brett Butler and Kel Dullihanty found both Todd Gregory and Matt Dallwitz open beneath the hoop for easy doubles. But that assumption was misplaced as individuals wallowed and pouted to the detriment of the team, allowing their opponents added possession and drive-through baskets.

At the other end of the court, it was a case one pass, turn and shoot, a tactic that almost guaranteed the Cobras a defensive rebound and although several shots unluckily rimmed in and out of the hoop, the Pirates tried to dig themselves out of trouble through late long-range shots whereas the majority of their earlier baskets came from near the rim.

The Pirates shouldn’t be too unhappy with themselves as for the first time this season they found some consistency in scoring and can generally say they were beaten by a team who far more desperately wanted to win, the Cobras scoring a massive 18 points in the final quarter to take them past the Pirates for a 27 points to 31 victory.