Somewhere deep inside the Pentagon, a junior Air-Force officer ran through the corridor toward the Defence Secretary’s office, dodging the regular foot traffic that abounds in a building of approximately 26,000 employees. Bursting through the door and interrupting an important meeting, Chuck Hagel looked up from his desk and caught the panting face of the officer who attempted to speak while regaining his breath: “Excuse me sir. We’ve got a possible Broken Ankle”.

Broken Ankle is a top secret call-sign used to signify the possible defeat of the Pirates Basketball Club that automatically triggers a massive military response in order to prevent such an event from occurring. It is also the name given to the new sequel to the 1996 action thriller, Broken Arrow, starring Christian Slater.

As well as breaking box office records for worst movie ever, ankles and egos were also broken on Monday night when the Pirates battled the WCWD Anklebreakers in a sloppy game that tested tempers and the confidence of the officials. Although trailing for most of the game, at one stage by as much as eight points, the Pirates scraped through by scrappily sticking to their game plan.

The opening exchanges weren’t too exciting for either team and it wasn’t until Daz Jamieson nailed his first three-pointer that the Pirates got on the board. 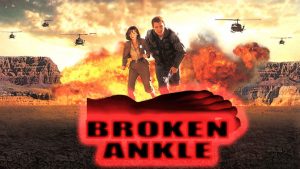 For the Anklebreakers it was soon made obvious who would threaten the Pirates in this matchup. Hau Wang was aggressive on the boards earning his team some easy second chance buckets from some lazy early defence by the Pirates. If not for Wang, the Breakers would have struggled with their low percentage, first option offence.

Still, opportunities went begging for the visitors too as several open layups were missed throughout the game, opening the door for the Breakers to counter at the other end of the court.

For the most part, the Pirates were able to negotiate the Anklebreakers trap defence, giving them the opportunity to attack the hoop two-on-one.

The Pirates seemed to struggle from long-range in the first half, a half that allowed the Breakers to take an eight point lead at the start of the third period. It wasn’t until Jamieson repeated his first quarter performance, knocking down successive three-pointers that the Breakers lead and confidence began to buckle.

It wasn’t until late in the fourth that the Pirates took the lead over the home side by a narrow two points and it was the Pirates who then took control of the tempo of the game, forcing the Breakers to intensify their defence in the hopes of causing a turnover that would not materialise in the remaining three minutes.

Not even a late charge by Rui Liu who scored two field-goals and a three-pointer in the final four minutes prevented the Pirates from running away with a messy victory thanks to decisive contributions from Matt Dallwitz, Brett Butler and Nick Percival.

The final score of 31 points to 34 was probably not the accurate reflection of the teams’ respective capabilities but it was an indication of how close these two teams stack-up on paper.

Fans won’t want to miss their next encounter in round 13 to see whether or not the Pirates got lucky on this occasion.