The hype surrounding the much anticipated match-up between the Pirates and the Honey Badgers essentially fizzled out as the Pirates found a way to dominate from start to finish against the under-strength Badgers.

Fans flocked from all across the country to see the Badgers take on the Pirates and left disappointed with the performance of their beloved mammals. Even team owner, Nick Cummins, was left red-faced at the post-game press conference where he stated he was embarrassed with how his team functioned on the night. 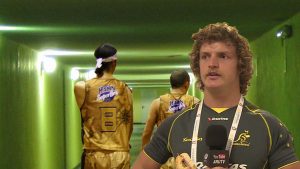 For the Badgers, their night opened with 50% of their first quarter points coming from free-throws as the Pirates easily denied them any meaningful opportunities in the paint.

In contrast, the Pirates found points forthcoming as they hesitantly cut their way to the basket. First through Frank Fernandez then followed-up by a gravity defying Deezy double-pump that earned him two points and a trip to the foul line.

Even though the first quarter was all from close range, the Pirates did find a way to get their outside game going through Daz Jamieson and Kel Dulihanty.

Up 23 points to 8 by half-time the Pirates could afford to relax their defence somewhat and that’s what allowed Jack Daniels to take some liberties inside the key to go on and score 8 of the Honey Badgers 19 points.

But if the Pirates were worried, they weren’t showing it as they laboured to produce one of their best quarters of the season putting on another 20 points to put the final result beyond doubt.

Daz Jamieson proved deadly both inside and out of the paint while Dan Bray made an impact after returning from a bruised ego having spent the last three weeks on the sideline.

An ugly incident midway through the final quarter marred what was a pleasant game as a frustrated Honey Badger appeared to tackle Kel Dulihanty who had just made a steal and was headed up the court.

With the game beyond doubt, the Pirates relaxed their defence a little allowing Chris Southwell to make some shots from inside the key.

The final score of 53 to 19 was hardly an indication of the strengths of these two teams and commentators are already speculating that the next time these teams meet will be a far closer affair.