While most Pirates fans were busy celebrating San Antonio’s 5th NBA Championship, the Pirates themselves were forced to contain their party attitude and play-out their match against the Ring Stingers. The only people not in a party mood were the dozen or more protestors from the Westboro Baptist Church who mistakenly travelled 12,000km to protest against the Stingers. 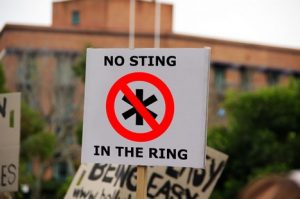 Players and fans who braved the cold temperatures outside the Tuggeranong Treasure Dome also had to brave the storm of protest from a dozen or so members of the Westboro Baptist Church who had travelled from Kansas, USA, to protest against homosexuality. It wasn’t until team managers informed the group that the name Ring Stingers referred to a basketball ring that the protestors scratched their heads and dispersed. Both teams would later join together to condemn the protestors for their hateful stance. 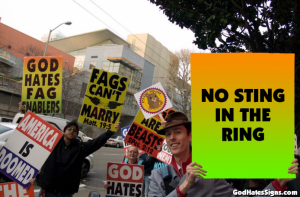 Once inside the stadium, fans quickly found themselves isolated as the many regulars who pack the stadium were assumed to be in the pubs and clubs across Canberra celebrating the achievement of local prodigy, Patty Mills. Several dozen more fans left the stadium once they were reminded of the San Antonio game by the announcer. 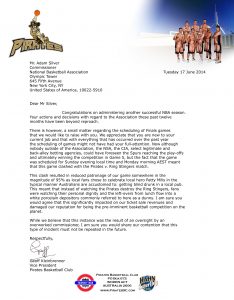 After winning the tip, the Pirates went to work offensively with Dan Bray providing immediate impact by scoring the Pirates first three baskets in the space of the first five minutes. These opportunities came from his pressure defence where he earned several turnovers that were taken directly to the hoop and the Pirates tally.

Ruled out of the game due to illness and injury were Pirates veterans Matt Dallwitz and Kel Dullihanty which allowed rookies Nick Percival and Christian Bourdais to get some time on the court. For Bourdais, making his debut for the Pirates, it had been a long time coming having spent the last six months on the bench. Bourdais wasted little time getting among the action, getting in close to the basket courtesy of some impressive Pirate passing and on the back of some strong individual drives.

The Stingers advertised early that they weren’t going to be an easy target for the Pirates as playmakers James McLauchlan and Michael Schubert posted their first points inside the paint.

Getting an early look from outside, Attlee Jones hit his first three-pointer putting the Pirates on notice that they could ill afford to leave him with space. The Pirates defensively were focussed on shutting down the Stingers point guard and two time League MVP, Jamie Moore. Moore’s deft touch and accurate long range shooting have seen the destruction of many lesser teams and it was for this reason that Coach K ordered the Pirates to lock him down.

Only one point separated the two teams at quarter time and Coach K needed to reinforce his side’s game plan to the team.

Kleinbrenner’s talk must have worked as the next two quarters belonged to the Pirates as they went on a twenty three points to six run in twenty minutes. Brett Butler was on the end of some pull-up jumpers and Daz Jamieson found his range from beyond the arc. Ben Roberts also started to feature in the Pirates attack and despite missing his first four shots, came good in the third period to score six successive points.

Holding it down defensively for the Pirates was veteran Daniel Lillicrap who made life difficult for Jamie Moore by forcing him to give up the ball early and by scrambling through screens and loose balls to make blocks and get stops.

With the damage already done, the Pirates took their foot off the gas pedal and gave-up a further six points to their own twelve before play ended, the Pirates deserving victors 45 points to 21.