For only the second time in fourteen seasons the Pirates have made the DMG Grand Final after soundly defeating second placed Shazam 49 points to 23 on Monday night.

The Pirates worked their way out of the gates slowly scoring just four points in the opening ten minutes thank s to a free-throw from Todd Gregory and a three-pointer from Kel Dullihanty. 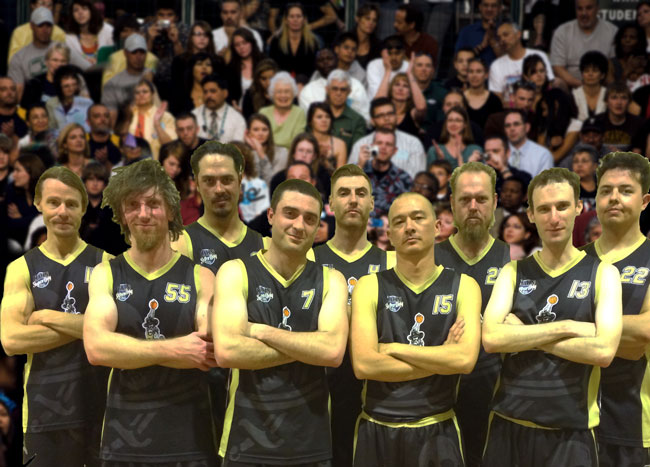 Shazam made a decent start for themselves through Michael Bateup, Michael Burdeu, David Ashe and Scott Culpitt scoring from range and from along the Pirates baseline to double the Pirates opening score.

With the crowd behind them and the lead with them Shazam entered the second quarter with confidence of scoring an upset victory over the Pirates and although they were up by as many as 9 points over their rivals, that was as far as they got.

A cool-headed Coach Kleinbrenner told his players to stay calm and work themselves back into the game and that is precisely what they did.

After opening salvos from Shazam, the Pirates went on a 10 point run to regain the lead and put pressure back on their opponents to find new ways to shut down the Pirates offence.

Shazam’s manager Vicky Dean had done her homework on the Pirates, producing a strategy that made it harder for the boys in black to use their three-point specialists however the Pirates found ways to adapt and opened up Shazam with some drives from the foul-line delivering points from the field and from the strip.

Shazam also took advantage of the Pirates weak baseline defence as Culpitt worked the narrow space underneath the hoop to get some much needed points.

Half-time had the Pirates ahead by five and the match was still up for grabs. A nervous third quarter from both teams slowed the scoring down but by the start of the fourth period the Pirates were up by seven and were in the box seat for the final stretch.

Saving their best for last the Pirates went on a 24 point spree to ensure their place in the DMG final while still restricting the desperate Shazam to just 8 as the final few minutes saw the Pirates go into the bonus with Shazam forced to foul to stop the clock.

The Pirates now face their biggest challenge as they look to unseat defending champions St. Edmunds in what is likely to be a fiery and physical encounter.

Tickets are on sale now through Picketek with fans to be treated to a special half-time performance from Beyonce and Jay-Z tribute band, Feyonce and Lay-Z.