By all accounts, it was the game of the season so far in the DMG on Monday night when the North South Ballers challenged the Pirates in a demonstration of good sportsmanship that had razzle, dazzle and just a little bit of frazzle.

Once again the Pirates took their time getting warmed up in the first quarter with some wayward passes and poor shot options on offence giving additional opportunity for the Ballers to get a foothold on the game.

Six points a-piece after ten minutes of play had the Pirates nervous going into the second period and although they had started to find their rhythm offensively, their defence remained problematic as the boys in black were guilty of ball watching and static defence against players in motion. 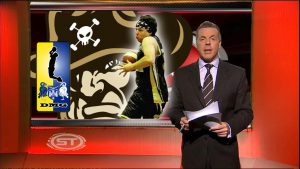 One thing certainly had coach Kleinbrenner, or coach “Special K” as the players now call him, pleased was the reduced turnover rate with the Pirates confidently moving the ball around the court searching and waiting until the right option appeared: “I was really happy with the way we controlled the ball and was particularly impressed with Buts (Brett Butler) and his passing tonight. He just found the right man at the right time and when that wasn’t an option, he took it upon himself to get to the hoop.”

From the start of the third quarter, everything seemed to click for the Pirates as they went about putting on a show for the 1,500 strong crowd who came to urge the North South Ballers on to an upset victory.

Kel Dullihanty had another stand-out performance for the Pirates with his positional play on fast breaks as well as his smooth passes to the Pirates big-men under the hoop. Matt Dallwitz also got amongst the action with some sweet reverse moves but what really brought the Pirates bench to their feet was a spectacular cut and reverse layup provided by Frank Fernandez. It was thanks to an equally spectacular pass from Brett Butler at the right elbow to find Fernandez in the right spot at the right time.

The North South Ballers weren’t without their own show moves as Jarrod Smith delivered the play of the day with a Jeremy Lin style spin move in traffic that found its way clean into the net.

Putting on 19 points in the third quarter, the Pirates built a solid lead that would be difficult for the Ballers to overcome. Still, Kristopher Milne did his best to get his side back on track and while both the Robson brothers and Yani Stauce managed to get by some lazy defence for some easy points, it was their offensive turnovers that ensured they would finish in second place for this game.

“They’re true sportsmen out to give their best and have a good time. They’re a great group of blokes” said Pirates Captain Daniel Lillicrap at the post game press conference where he was full of praise for his opponents.

Both teams entered into somewhat of a stalemate in the final quarter, adding points to their respective scores but with neither team gaining any additional advantage over the other. The final score of 40 points to 31 would have been pleasing to both teams although this game should be measured in more than points but in terms of improvement.