The Pirates were completely outclassed Monday night in what was the culminating event for this year’s 2013 Canberra Classic and Australia Day holiday weekend. The game was almost cancelled due to an electronic fault that was likely caused during Saturdays major electrical storm, however after a brief delay of 20 minutes, the match went ahead.

Prior to the tipoff, fans were provided with a special treat when Australian music legend, Jimmy Barnes, joined forces with world renowned comedian, Adam Hills, to sing Advance Australia Fair to the tune of Working Class Man.

From then it was down to business as Matt Dallwitz (4 points) won first possession for the Pirates who squandered some early scoring opportunities as they tried to find their rhythm.

We Got Game got off the mark quickly thanks first to Nick Percival (6 points) and then followed by his brother Jamie (2 points) who gave the crowd a sneak peak of the type of shooting that would hit the Pirates in the second half.

The Pirates steadied themselves towards the end of the first quarter by putting on 7 unanswered points to bring the scores level at ten a piece going into the second period.

Still not at their peak temperature, We Got Game maintained a steady pace offensively, taking advantage of some inexperienced Pirates defence to take their total to nineteen by half-time.

Remaining competitive, the Pirates only trailed by one going into the locker rooms thanks to some snappy shooting by veteran forward Ben Roberts (9 points). Roberts had a particularly successful night from the foul line, hitting better than 80% of his shots.

At half-time the crowd were treated to an extravaganza of Australian culture when the cast of the hit Australian television series, Bogan Pride performed a musical tribute to a great national icon, the Cashed-Up Bogan. 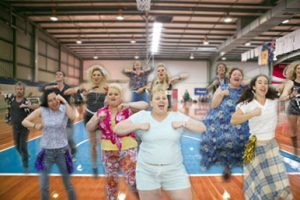 From the start of the third quarter things started to fall apart for the Pirates and everything seemed to fall into place for We Got Game as Brenton Nelson (16 points) dominated the court both inside the paint and from beyond the three-point arc.

Nelson was joined by Matthew Swift who also found it hard to miss going on to score 9 points of his own to really stretch out their lead over the scurvy sea dogs.

What originally seemed like a close game then became a rout as the Pirates could only muster another 9 points across two quarters to reach a total of 27 while their opponents blew out their score to 43.

Admittedly, the Pirates roster has been full of injury with Kel Dullihanty, Todd Gregory, Dan Bray and Francois Tricoire all missing from the line-up.

With another nine games to go before the playoffs, the Pirates still have a bit of time to find their rhythm and salvage their season.