The failure of an air-conditioning vent inside the Tuggeranong Treasure Dome saw fans and players alike swelter in the 30+°C heat. Ill prepared for the conditions, the Pirates struggled to find any rhythm in the match allowing their opponents to edge out a narrow three-point victory, 29 to 26.

The first half was a low scoring affair with both teams only reaching 12 point totals. The Raptors leaned heavily on Mark Gale (6 points) and his pull-up jumpers from the foul-line along with the consistent shooting from Paul Edwards (10 points) while the Pirates had Darren “Daz” Jamieson (10 points) open on the perimeter to even up the scores. 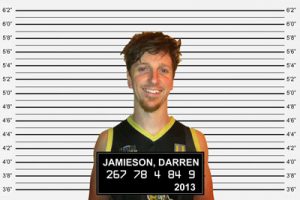 Jamieson was subsequently arrested and charged with attempted extincticide for trying to kill the last remaining raptors found in the wild. Because this was a misdemeanour, Jamieson was later bailed by Chico’s Bail-Bonds and ordered to perform two hours community service. Jamieson has since performed his service to the community electing to teach inner-city youths classical 17th century poetry.

Making his debut for the Pirates, rookie Ashley “Pyro” Forrest (4 points), provided some strength inside the paint to help counter the physical presence of the Raptors forwards but one of the areas that truly let down the scoundrels of the sea was their failure to box-out defensively. All the Pirates were guilty of allowing the Raptors to steal some second chances by running in from outside the perimeter when the shot went up.

Adjusting their defence in the third quarter to better close-out the Raptors leading scorers from the first half, the Pirates then let themselves down by allowing the Raptors some second and third chances from others in the Raptors side.

Yet what was impressive from the Pirates camp was their defensive attitude after a turnover. What were certain baskets for the Raptors ended in rebounds for the Pirates thanks to the wits and dedication of those on the team who doggedly chased down free players on the break and forcing them to make tough shots.

While poor passing ultimately cost the Pirates the game with the combination of inattention and bad decisions leading to cheap possession for the Raptors, the Pirates were far from their best and will almost certainly be working hard through the week to learn from their mistakes and improve their chances for their next match-up.