For the first time since their arrival in the CPL, the Pirates looked to be in a fight they could win. Then they found out that they were against the fightingest squad in the fightingest team in the third fightingest league in the competition.

Trading basket for basket in the first quarter, the Pirates had hope that they could remain close enough to their opponents in the fourth quarter that they could spring some additional courage and push the Hellfish back into the sea so as to record their first victory in the CPL. 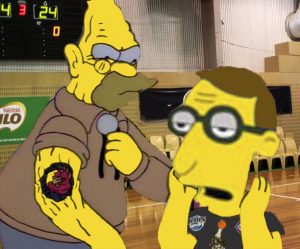 Leading the charge was Taylor Sneddon (15 points, 3 steals, 1 assist, 1 rebound), who was traded from STJ to the Pirates just hours before the trade deadline and the start of the match. Stamping his name on the team’s first five points, Sneddon made it look easy by first hitting a contested three from the wing then backing it up with a hard-fought jump shot just outside the key a minute later.

While Box Sports commentators stated on live TV that it was “all the Taylor Show”, fans would soon discover that the Pirates were spreading the wealth around as both Brett Butler and Todd Gregory nailed their jump shots to keep the scores at an even pace.

After the first quarter, the Pirates progressively slowed down in the remaining three periods becoming their own worst enemy as they clumsily got in each other’s way and cluttered up the key, all seemingly fixated on getting the ball rather than getting free.

There was no doubting who the Hellfish were going to look to for their points and he didn’t disappoint. Julien Hume (19 points, 5 steals, 4 rebounds, 1, block, 1 assist) weaved his magic throughout the game, troubling the Pirates with every touch of the ball.

Closing out the game with a seventeen point margin, the Hellfish clearly benefited from a disorganised Pirates unit that had a disrupted training schedule over the past two weeks. Whether the Pirates will be the same team the next time these sides play one another is anyone’s guess.