Asafa “Asa” Phelps (no relation to Olypmic champion Michael Phelps), decorated World War II veteran and co-founder of the Hellfish, died at 6:20pm on Tuesday evening aged 92. It was only after a long running and bitter feud with C. Montgomery Burns that nature finally assassinated Phelps, accomplishing what Fernando Vidal and several other imprisoned assailants failed to do. His team dedicated their victory over the Pirates to his memory.

A minute’s silence was held prior to tip-off in honour of Mr. Phelps, the moment tarnished by a solitary Hellfish fan who had too much to drink in the lead-up to the game. 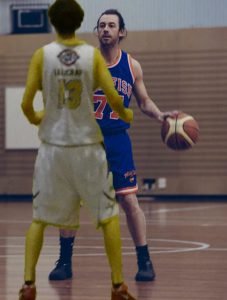 Phelps’ passing was almost certainly the motivation behind the Hellfish victory over the beleaguered Pirates on Tuesday night, as they went about physically demolishing their opponents.

But just as the Hellfish were commiserating the loss of a founding father, the Pirates were celebrating the new addition to the Butler family, Archie Jaxon Butler, first child to Suzanne and Brett Butler who is of course a power forward in the Pirates lineup.

Recognising the motivation of the Hellfish (with the loss of their founding member) would play an instrumental part in their performance on the court, the Pirates were aware that this game was going to be anything but easy. Their strategy of targeting All-Star and Hellfish point guard, Julien Hume (14 points, 8 rebounds, 3 assists, 1 steal) was a hit and miss affair in that the times when he was closely guarded from full-court, he was prevented from getting the ball or was inhibited from exercising his ability to bring the ball up the court and thus he was restricted in scoring. Yet the times he was allowed to easily receive the ball it ended in either points or assists to Hume.

While the focus may have been overtly on Hume, the Pirates were also aware of the danger presented by Ben Artuso (24 points, 9 rebounds, 3 blocks, 1 steal) yet seemingly placed a secondary emphasis on inhibiting him and his ability to dominate inside the key.

Offensively, the Pirates were their worst enemy with an overwhelmingly unhealthy fixation on the ball rather than on helping their teammates get free. It was obvious that the Pirates offence had broken down on almost every occasion as they failed to work for one another and create options beyond the one-on-one drive.

Frustration and a clear officiating inconsistency didn’t help the Pirates in their cause and the team suffered as a consequence as they vented their frustration at officials who were forced to call, correctly, technical fouls against the Pirates.

Missing their star scorer, Taylor Sneddon, the Pirates had no stand-out offensive capability yet still managed to spread the scoring among the team with Dan Bray (7 points) and Todd Gregory (7 points, 6 rebounds, 1 assist) leading the charge. But as stated earlier, the Pirates were more a bunch of individuals than a coordinated team; each focussed on obtaining the ball rather than focussing on what they could do for the teammate to get free.

In all, it was a disappointing outing for Pirates fans who have come to expect more from their team since their efforts against league leaders, the Diablos. The final score, 56 points to 25, showed that the Pirates still have a long way to go both at an individual level and as a team.