In only his second game back from the CBA (Croatian Basketball Association), Pirates forward Matt “Darth Vader” Dallwitz (3 points, 15 rebounds, 2 steals) made a big impression in his side’s game against the Hornets and although the high-flying insects severely stung the swashbuckling renegades, Dallwitz showed that he was capable of some altitude of his own.

The Pirates opening salvo in the first quarter inspired the bench and gave optimism to the squad that they might manage an upset against one of the top teams in the league. Daz Jamieson (8 points,  7 rebounds, 3 steals, 1 assist) and Kel Dullihanty (7 points, 3 assists, 1 steal) nailed triples that forced the Hornets to change up their defence as the Pirates led 9 points to 5 midway through the first quarter. But with the new defence in play the Hornets began to get the upper-hand. 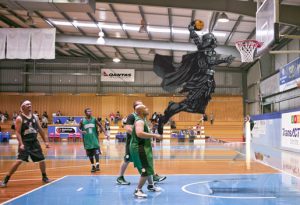 A blistering second quarter put the game beyond doubt with no single player controlling the Hornets’ offence thus allowing for a genuine team victory over their rivals.

Poor passes that missed their targets, slipped through fingers or were sent into the arms of their opponents cost the Pirates dearly in the second and third quarters but did not prove to be the decisive factor in their loss. Aside from Pete Maddocks devastating outside game, the Pirates were ultimately defeated by precise and patient assists made by the Hornets on offence. As the Pirates adjusted their defence to meet the most immediate threat, the Hornets would find a teammate equally threatening either under the basket or out on the perimeter for three, their total assists almost doubling their opponents.

Careless offence in the final three minutes of the fourth quarter allowed the Pirates to go on an eight point run to help narrow the margin as they intercepted or stole the ball several times in quick succession but facing a heavy defeat by 37 points, the domination of the game’s last possessions was only a minor consolation.