“Baby face” John Burgess, host of Australia’s TV game show, Wheel of Fortune and owner of successful basketball franchise, We Got Game, was forced to eat some humble pie last night as his side was systematically targeted for destruction.

Burgess had been talking up his team through the week, announcing that We Got Game were going to “bankrupt” the Pirates.

Getting this party started was Francois “Tricky” Tricoire (14 points) when he managed to steal a pass intended for a teammate going on to score the first bucket of the encounter. 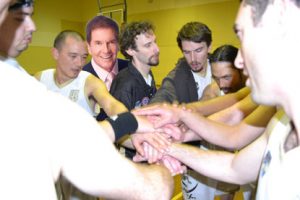 Next to score was Brett “Jeeves” Butler (7 points) with a triple courtesy of a foul committed by Matthew Nelson (4 points).

Todd Gregory (10 points) was in fine form from the field nailing better than 70% of his outside shots however the night belonged to Matt “Doc” Dallwitz (7 points) and Francois Tricoire who were either scoring, stealing, hustling or boarding when not on the bench.

Conversely, having an ordinary game to say the least, Pirates captain Daniel Lillicrap, seemed to be cursed when he was forced to foul two fast-break plays made from Pirate turnovers. On both occasions the foul wasn’t strong enough to prevent first, Brenton Nelson (6 points) and then Matthew Swift (8 points) from making the basket, bringing back memories and comparisons to Cleveland’s Craig Ehlo.

Defensively, the Pirates had the right strategy preventing Nelson from getting anywhere near the ball, then doubling on low-post plays and finally contesting the pull-up jumpers of Kirt Walters (8 points).

The always dangerous Matthew Swift (15 points) stepped-up his game to compensate for the guarded Brenton Nelson while shots from both Jamie and Nick Percival found their mark in what was an excellent shooting performance from We Got Game, besting the Pirates from the field by shooting 81% compared to 78%.

Still the Pirates persevered by adjusting their offence easily finding the loose cutter who more often than not finished off a close-in lay-up. 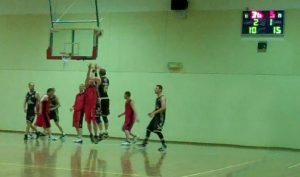 In a triumph of passing, the Pirates put on 18 points in the first quarter before slowing in each subsequent quarter with 15, 10 and 7 points posted respectively.

Missing several of their regular players through injury and incarceration, the Pirates drew on their back-up squad for the match however, Coach Patches O’Houlihan, refused to play any of these new players, preferring his regular squad to dig deep in order to close out the match.

Exhausted, the Pirates came through this test with a greater sense of confidence as they steam toward their battle with the troubled Easts, a team modelled heavily on the Oakland Raiders.

Finishing victors 50 points to 40, the Pirates retain their second place on the ladder and look to build upon their strong start to the season.