Scientists have been forced to re-evaluate current theories regarding the extinction of ancient reptiles after the Pirates slaughtered the Raptors on Monday night in an incident described by one prominent palaeontologist as “eerily reminiscent of what we believe happened to the dinosaurs.”

Eggheads from across the globe are now examining a new theorem being postulated by scientists, Doctors Carl Carlson and Lenard Lenford from Swigmore University’s Department of Fossilised S#!t, suggesting the dinosaurs were eradicated by early pirates. 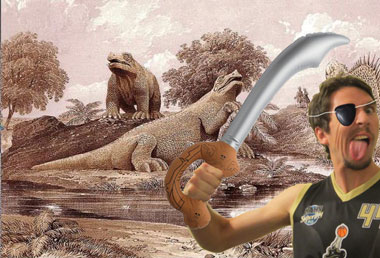 What has scientists so excited about this new theorem is the way in which the Pirates mimicked the total destruction of a group of Raptors during the first quarter of Monday night’s CMG basketball game.

It was all one-way traffic for the Pirates in the first ten-minutes of play with guard, Kel “Hammer” Dulihanty (6 points), going on a rampage to score all his points in the first six minutes of play. Applying a hammer of his own, Brett “Jeeves” Butler (6 points) got physical with defenders in the low post, using his size and strength to overwhelm isolated opponents.

For the Raptors, their campaign for survival didn’t officially kick-off until the eighth minute when they scored their first field goal courtesy of Paul Edwards (18 points) who always seemed to be at the point of a good dish, solid shot or easy close-in bucket.

While the Raptors may have already appeared extinct by the end of the first quarter, a revival was in the offing as the Raptors fought their way back from the brink over the course of the next two periods.

Leading the charge were Edwards and Kris Thomson (7 points), their combination often proving too much for the Pirates defence to handle as they would draw multiple defenders before finding the open man along the baseline.

With just three minutes remaining in the final quarter, the Pirates lead over the Raptors was reduced to just three but some judicious shooting from guards Dan Bray (11 points) and Darren Jamieson (6 points) allowed the Pirates some comfort despite the added pressure from the Raptors.

As the final buzzer sounded, it was the Pirates who were left to stand tall on the court, winning out over their worthy rivals 37 points to 32.