The Robo Pandas were determined to score back-to-back victories against the mighty Pirates on Monday night, turning up the pressure on the rugged beer swilling swine of the sea with an intense man-on-man defence that generated higher turnovers for the Pandas as well as easier baskets for the Pirates.

Surprised by the additional attention the Pandas were showing, the Pirates found it difficult to establish a rhythm in the first quarter, relying on Francois “Tricky” Tricoire (9 points) and Kel “Hammer” Dulihanty (6 points) to get things moving. 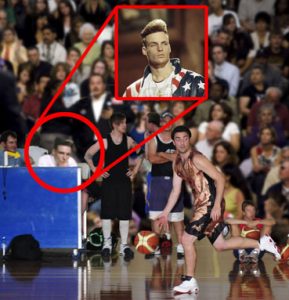 Leading at the first change 10 to 8 in the nation’s capital, the Pandas looked confident in the huddle, eager to repeat their last victory over the Pirates at the end of last season when they defeated the scourge of the Southern Ocean in an epic battle 42 points to 41.

At the break, the Pirates gained the opportunity to reorganise and get their offence functioning against the unanticipated pressure from the Pandas.

Yet for all their organisation the Pirates relied more on the skill of their players than their offensive tactics, seemingly preferring to do their own thing rather than persevere patiently for the right opportunity to score.

Still, when they did score the Pirates made it look easy, often receiving a pass no more than two steps from the hoop where it was simply a case of ensuring the ball dropped through the hoop.

While the Pirates may have been relying on skill and structure, the Pandas were showing some true grit, determination and talent as they went about their business. On numerous occasions the Pirates were left mesmerised by the ability to make the tough shot despite some obvious fouls and interference by the Pirates. “They showed some real class out there tonight” said Pirates captain Daniel Lillicrap at the post game press conference. “We found it easy to get to the hoop when we took our time while the Pandas almost always had to earn their points the hard way. I take my hat off to them.”

Lillicrap was especially impressed by the efforts of Simon Reynolds (11 points) who was devastating inside and out of the paint. Even when fouled, Reynolds found the strength to find the inside of the rim.

Equally impressive were the hook shots made by both Pascal (2 points) and David Deschanel (2 points). Heavily guarded by one of the Pirates most zealous defenders, Ben Roberts, the Deschanels still managed to drop the ball through the hoop gaining both valuable confidence and points for their team.

Despite being down by two points in the first quarter, the Pirates always seemed to be in control of the game, even when it was going against them. This was in no small way attributable to Lillicrap’s leadership skills, organising his troops to exploit the vulnerabilities in the Pandas defence.

Half-time saw the slightly higher crowd of 24,899 at the Treasure Dome begin to chant for Vanilla Ice himself, Rob Van-Winkle, who had been spotted along the bench during the first-half. Unfortunately for the Canberra crowd, the Ice-Man could not be sparked to do an impromptu performance of his number one hit, Ice Ice Baby. Later it was revealed that Van-Winkle was a long-time friend of Pirates Vice President, Geoff Kleinbrenner. 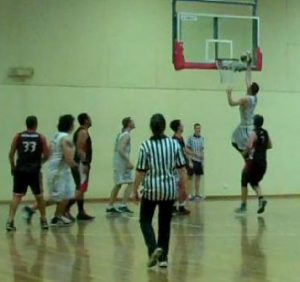 While the first half may have seen the spectacular dunking style of Todd “Terminator” Gregory (8 points) whose spectacular 360 reverse indie nosebone jam almost certainly secured him a spot in this year’s CMG dunk contest.

If Gregory was doing it on the offensive end, Fernandez was doing it at the defensive end. Fernandez unwittingly disrupted the game in the third quarter when he rejected the ball well beyond the stands and into a support structure, both deflating the game-ball and visibly distorting the steel superstructure of the stadium. Crowds in the E through G stands were temporarily evacuated while engineers assessed the damage. Twenty minutes later, the engineers gave the all-clear and play was allowed to resume.

The final quarter witnessed the collapse of the Robo Pandas as they could only muster 4 points, all from free-throws made by Brad Knonamè (6 points) and Thomas Ng (3 points).

Winning 41 points to 34, the Pandas can consider themselves unlucky not to have been closer at the end, but also thankful that the unprepared Pirates could not muster a fully coordinated offence that would have seen the Pandas become extinct.

Even though the result went against them, the Pandas demonstrated that they were the most spirited, supported and tenacious team in the league. Something the Pirates could stand to emulate if they are to prove themselves worthy of a finals campaign in 2013.

One way the Pirates can begin to prove themselves is with an upset win over league heavy-weights, the 66’ers. A victory over last-year’s runners-up would certainly put the rest of the CMG on notice and also fire the Pirates to increase their commitment and their performance.