A bittersweet ending to one of the Pirates most popular imports came on Monday night when the depleted Pirates went down to a new-look Ruff ‘N Ready side 32 points to 24.

The Pirates got out of the gate to a good start putting on ten points through the likes of forward, Todd Gregory (12 points) who scored 8 of his total in the first eight minutes of play to give his side a 5 point buffer over their rivals. 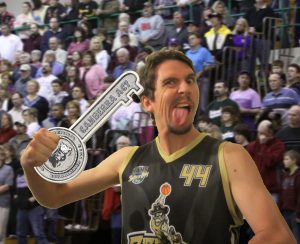 This buffer would not last long thanks to some precise shooting from Ruff ‘N Ready’s Glen Shiel (9 points) and Ben Forbes (2 points).

In contrast, the Pirates only points for the second period came late through a charge made by Brett Butler (2 points), banking his only successful shot off the glass and into the net.

Still only trailing by one at the half-time break, the Pirates weren’t outwardly panicking as both teams remained on the court to witness French import, Francois Tricoire, receive the keys to the city from the Chief Minister of the Australian Capital Territory, Katy Gallagher. 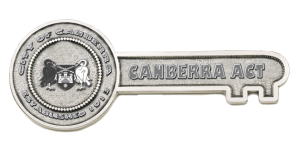 Gallagher was full of praise for the Frenchman who has put the Capital firmly in the eyes of the French media who have followed Tricoire’s Canberra exploits closely.

Tricoire himself was inwardly emotional in his acceptance of the honour, thanking his teammates and the many fans who have supported him during his eleven months in Australia.

Packed out to full-capacity, the crowd in the Tuggeranong Treasure Dome cheered wildly at the conclusion of his speech, several young women clearly upset at the prospect of being without the fearless Frenchman next year.

Minutes later the game resumed and again the Pirates struggled to find the inside of the bucket, Ruff ‘N Ready’s lead growing out to four points by the end of the third quarter.

Pirates captain, Daniel Lillicrap, suggested after the game that it was the increased pressure to send “Tricky” out a winner and the capacity crowd that made the team a little more nervous than usual, factors he believed contributed to their failure to convert their offensive opportunities.

Another slow quarter by the Pirates all but ensured their fate, their night full of second and third chances that just never dropped. The final score of 32 points to 24 was below average for both teams but still reflected the relative soundness of the Pirates defence.

Tricoire took one last lap of the court, taking the time to mingle with fans and sign autographs before heading to the locker room where the team had a modest farewell celebration prior to the Pirates private send-off Tuesday at the Transit Bar. 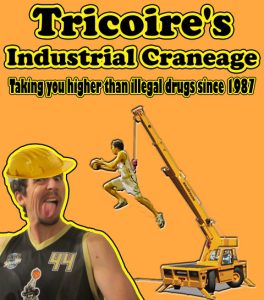 Tricoire now returns to his native France where he hopes to take a break to start-up his own construction enterprise before he is listed as a free-agent with the International Basketball Federation where he is sure to be snapped-up quickly.